Dedicated to the Arts 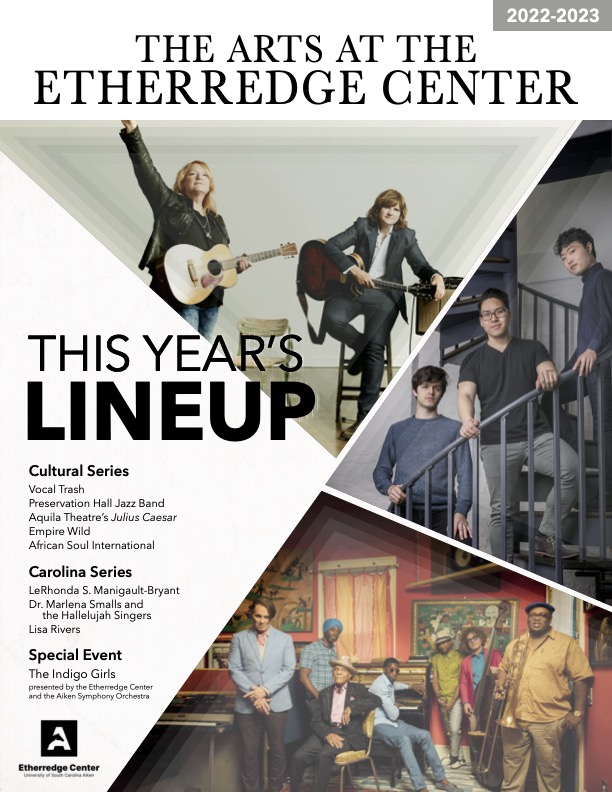 A Word From the Executive Director

"The life of the arts is far from an interruption, a distraction, in the life of a nation, is close to the center of a nation's purpose-and is a test of the quality of a nations' civilization."
President John F. Kennedy

The Arts are not only central to a nation’s purpose, but they are also central to the guiding purpose of the University of South Carolina Aiken. USCA is a proud COPLAC university, one of only 29 in the entire country. The Council of Public Liberal Arts Colleges (COPLAC) represents institutions where “students, staff, faculty, visiting artists, and scholars come together to create vibrant educational environments.” To further that mission, we are proud to unveil The Arts at the Etherredge Center this year, as a way to bring all of our programs under one tent, so to speak. Building off of our first full season back from COVID, where we welcomed approximately 1,500 patrons back under our roof, we are thrilled about everything we can bring to the USCA campus, greater Aiken, and CSRA communities for 2022-2023.

This year, our Carolina Series, which always highlights some of the amazing artists we have here in South Carolina, focuses on the Low Country, as we are Celebrating Gullah Culture. We begin by featuring LeRhonda Manigault-Bryant’s book, Talking to the Dead: Religion, Music, and Lived Memory Among Gullah/Geechee Women. “Rhon” is a native of Monck’s Corner, SC, but now lives in Willamstown, MA, where she is a Professor of Africana Studies at Williams College. On September 8 we’ll have a reception, followed by a reading from her book and book-signing. Shortly after, on October 11, we are thrilled to welcome Dr. Marlena Smalls and the Hallelujah Singers. From humble beginnings in Beaufort, Dr. Smalls has gone on to perform for the Queen of England, at the Frankfurt Opera House in Germany, and all across Europe. We close out our Carolina Series with an exhibit in our gallery by Beaufort-based artist, Lisa Gilyard-Rivers. At her Opening Reception and Artist Talk, on February 10, you’ll get to experience firsthand the Gullah family stories she paints on all of her canvases.

Those three wonderful events are just the beginning, though, as our Cultural Series brings Diverse Shows for Diverse Audiences to our beautiful Etherredge Center stage. Following in the footsteps of previous family shows like “Artrageous” and the “Queen’s Cartoonists,” we kick off our season with a performance for all kids, from 1-92! Vocal Trash, performing on October 23, has been described as “Glee meets Stomp,” and has energized audiences from New York to Seattle to Las Vegas to Beijing. November 15 brings a taste of New Orleans to Aiken, with the world famous Preservation Hall Jazz Band. Coming to us live from the venue that gave the band its name, they have “held the torch of New Orleans music aloft for over 50 years” with the vibrant sounds of the French Quarter. Moving into the new year, the award-winning Aquila Theatre company returns to Aiken with their production of Julius Caesar. In this striking new production, Shakespeare’s tense political thriller jumps off the stage. On February 17, join us for one of the most incredible—and incredibly talented—trios you’ve ever seen or heard. Empire Wild features three classically-trained musicians exploring the fusion of classical, Broadway, pop, and folk music. On March 30, we conclude our season with African Soul International. Founded in 1998, this group has toured the world, performing with and for some of the biggest names in entertainment, politics, and more. With traditional African drumming and dance, they have brought the joy of African performance culture to over 100,000 people.

While we have loved bringing you our Cultural and Carolina Series the past several years, this year, we decided that just wasn’t enough! In partnership with the musicians you know and love from the Aiken Symphony Orchestra, we are proud to present a special event: The Indigo Girls with the Aiken Symphony Orchestra! On September 16, live from our stage, see the GRAMMY Award-Winning duo, as they perform some of their most-beloved songs, re-imagined to include the lush sounds that only a world-class symphony can bring. This special event, which is to be found on either the Cultural Series or ASO regular season, will be a one-night only phenomenon that Aiken will remember for years to come.

Finally, before you look through for more information, and start to place your orders, let me say THANK YOU to each and every one of you. We can’t do what we do, without you. Your time is immensely valuable, and we appreciate you spending some of it with us each year.

Directions to the Etherredge Center