Join us for the 2021 Joye in Aiken/USC Aiken Summer Jazz Camp!

The Joye in Aiken Jazz Camp (to be led by our Juilliard-trained Artistic Director for Jazz) is scheduled for June 24-27, 2021, in partnership with USC Aiken. 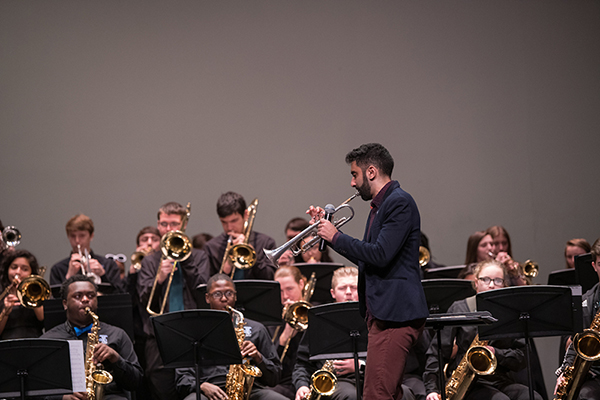 Riley Mulherkar has been recognized as a “smart young trumpet player” by The New York Times, praised by The Wall Street Journal as a “youngster to keep an eye on,” and is a 2020 recipient of Lincoln Center’s Emerging Artist Award for his work as “an original bandleader, composer, arranger, educator, community activist and advocate for jazz and the arts.”

Born and raised in Seattle, Riley moved to New York in 2010 to study at The Juilliard School, where he completed his Bachelor’s Degree in 2014 and his Master’s in 2015. In 2014, he was the first recipient of the Laurie Frink Career Grant at the Festival of New Trumpet Music.

Riley is actively engaged in educational outreach, directing the Summer Advanced Institute at Seattle JazzEd, and serving as an ambassador for Jazz at Lincoln Center’s “Jazz for Young People” program in New York and St. Louis from 2016 – 2018. Riley is an Edwards Artist and performs on Edwards trumpets.