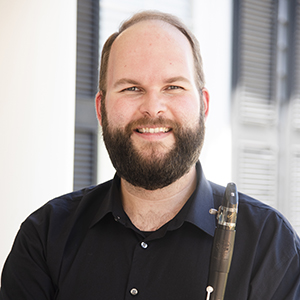 Mr. Zachary Bond is a clarinetist and teacher holding degrees from the University of South Carolina-Columbia (MM) and Newberry College (BM), and is currently completing his studies as a DMA candidate in clarinet performance at USC.  His primary instructors include Joseph Eller, Dr. Barry McGinnis, and John Bittle with additional experience garnered from numerous acclaimed artists, such as Steve Cohen, Robert Spring, Robert DiLutis, Fan Lei, and Karel Dohnal.  He serves on the music faculty of the University of South Carolina-Aiken as Adjunct Clarinet Instructor and Lecturer in Introduction to Music, World Music, and beginning in the Spring 2020 semester, History of American Music courses.

As a teacher in higher education, Zachary teaches undergraduate applied clarinet lessons, holds seminars and masterclasses, instructs clarinet and woodwind chamber ensembles, serves as a Faculty Artist with the USC Aiken Wind Ensemble, and designs and leads World Music, Introduction to Music, and History of American Music courses, striving to deliver a student-centered approach to teaching.  That mentality is carried over into the community, as Zachary serves as Co-Founder and Co-Host of the Palmetto Clarinet Festival, which strives to be the state’s premier event regarding clarinet performance and education for students of all ages and abilities.  He is sought after as an adjudicator, serving as a member of The International Academy of Performing Arts and Sciences for the ENKOR Competition, an online international solo and ensemble competition that critiques and awards solo and chamber music group performances of students ranging from elementary to college level.  He has also served as woodwind and brasswind adjudicator for the SCMEA Solo and Ensemble Festival and clarinet adjudicator for the South Carolina All-State Band auditions, with his own students earning top honors in both Region and All-State Band, and at other performance opportunities and workshops.

As a performer, Zachary specializes in numerous performance genres and styles, ranging from a soloist to the orchestral, operatic, band, chamber, and jazz settings.  A member of the Aiken Symphony Orchestra, the Aiken Civic Orchestra, and the Savannah River Winds, he has appeared with the South Carolina Philharmonic, the Spartanburg Philharmonic, the Lake Murray Symphony, and the USC Symphony, collaborating with major nationally and internationally acclaimed artists and groups, including Zuill Bailey, Vadim Gluzman, Natasha Paremski, and the New York City Ballet, and with local performers, such as the Columbia Choral Society, the Sandlapper Singers, the Dutch Fork Choral Society, and the Palmetto Chamber Orchestra.  He is a founding member of Ensemble Eclectica, a Columbia-based ensemble that delivers a “wide variety of artistic collaborations featuring local musicians, dancers, visual artists and media professionals.” Zachary has worked frequently with Teatro Lirico d'Europa, a world-renowned opera company, in performing Puccini's Turandot and Madame Butterfly, with additional performances of Bernstein's Candide and Donizetti's Elixir of Love with USC opera students.  While a member of the USC Columbia Wind Ensemble, he has participated in performances for the 2013 CBDNA National Conference with a release of a CD, “And I Await,” on Mark Records.